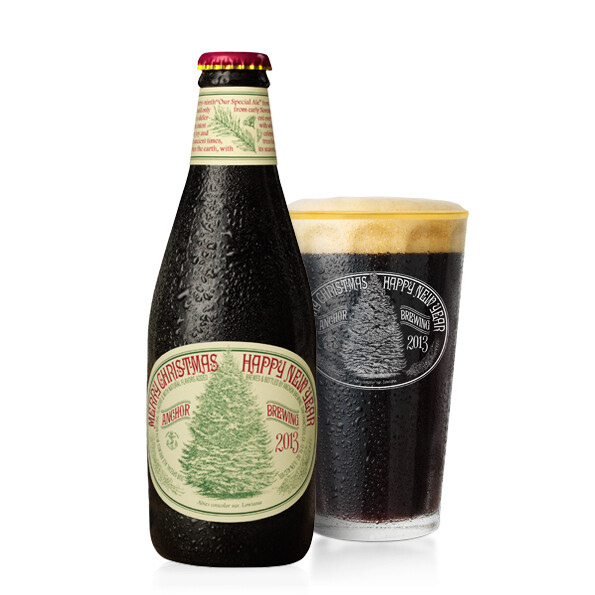 Please note this ale states best before 2015 on the bottle - As we know at Trembling Madness this is still great to drink and a Vintage blend - do not buy this if you are worried about drinking Vintage ale.

In 1975 Anchor released the first holiday beer in America since Prohibition. Each year since 1975, Anchor Brewing has created a distinctive Christmas Ale. A rich, dark spiced ale, our secret recipe is different every year—as is the tree on the label—but the intent remains the same: joy and celebration of the newness of life. With a heavily guarded, secret recipe, Christmas Ale is sold only from early November to mid-January.

Along with an evolving recipe, Christmas Ale portrays a new label every year. Since ancient times, trees have symbolized the winter solstice when the earth, with its seasons, appears born anew. The tree on this year’s label, a California White Fir (Abies concolor), was hand-drawn by Bay Area artist James Stitt, who has been creating Anchor’s Christmas Ale labels since 1975.

Anchor Christmas Ale is perfect for cozy nights by the fire, and it pairs well with holiday fare, whether it is a roasted turkey dinner, sweet potato pie, or roasted chestnuts. A beloved tradition for many Anchor fans is to collect multiple years of Christmas Ale. Stored in a dark and cool place, the beer remains intriguing and drinkable for years. Different nuances emerge as the flavor mellows slightly, much like the memories of great holiday seasons past. The beer’s wintry spiced flavors evolve, making vertical tastings a tasty holiday activity. Celebrate the holidays with Anchor Christmas Ale, a tradition since 1975.